Lacking guidance from doctors, parents lead the charge in treating children with CBD 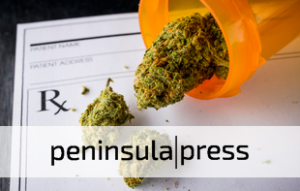 Mike Graglia opens a kitchen cabinet in his Palo Alto home and sets a clear plastic bin on the counter. Inside, there are heaps of oral syringes and some brown bottles.

Graglia presses a syringe to the mouth of one bottle and pulls the plunger, filling it with a brown liquid. In the living room, Graglia’s son, Tony, a four-year-old with wide blue eyes, is playing with toy cars on the carpet. Tony lines them up, grouping his tractors and sorting his cars by color.

Tony has genetic epilepsy, which his family treats with cannabidiol, commonly known as CBD and is a sister compound to THC in cannabis. Graglia drives an hour and a half to buy CBD oil from a dispensary in Modesto, Calif. called Jayden’s Journey. He is one of a legion of parents who have turned to CBD oil in order to treat their children.

Jason Stanislaus, the owner of Jayden’s Journey, estimates that his Modesto dispensary alone treats about 1,400 to 1,500 children. About 150 families regularly fly from other states to purchase CBD oil, and about 40 other families fly in from other countries, according to Stanislaus .

Unlike THC, CBD doesn’t produce a high. Instead, it has effects like reducing inflammation and relaxing muscles. CBD can be used as a form of medical marijuana when recommended by a doctor. Initial medical research has investigated the use of CBD in treating addiction, schizophrenia, cancer, anxiety, post-traumatic stress disorder, acne and Alzheimer’s disease.

CBD is hitting a new high in popularity. This week, more Americans Googled “Cannabidiol” than ever before. And in June, the U.S. Food and Drug Administration approved a CBD-oil called Epidiolex to treat certain forms of pediatric epilepsy. It was the first time cannabis medicine has ever been approved.

“Let’s go back to Christmas 2017. If you told me, ‘You can buy CBD gummies on Groupon,’ I would have said, ‘What are you smoking? That’s ridiculous,’” said Dr . Tim Fong, a researcher at UCLA’s Cannabis Research Initiative.

CBD’s success in treating children with seizures has fueled a new demand from parents of sick children who are hoping that the substance can help.

But when they turn to their doctors for advice, many of their questions remain unanswered. Doctors are often unable to provide guidance because they are not trained about the therapeutic use of medical marijuana and lack research on which to base recommendations. In interviews, multiple doctors said that they wouldn’t even know where to begin when recommending a dose of CBD.

Faced with a lack of guidance from their doctors and the possibility that CBD could help their sick children, parents are taking their children’s health into their own hands .

Graglia holds out the oral syringe. Looking up from his cars, Tony takes it and squirts its contents into his mouth.

Though he may seem like an average toddler, Graglia explains that Tony is developmentally months behind his peers, and that gap will only widen with years to come. Tony’s form of genetic epilepsy is caused by a mutation in his SYNGAP1 gene.

Tony had his first seizure at three years old. He also had insomnia, often fighting to stay awake until midnight and rarely staying asleep.  He also exhibited developmental delays and poor muscle tone. Behaviorally, Tony would explode into extended tantrums from the smallest of triggers and was very difficult to calm down.

Once Tony got his diagnosis, the Graglias tried two epilepsy medicines. They partially reduced Tony’s seizures, but the side effects “zombified” him.  Epilepsy drugs are known for their harsh side effects, including hallucinations, full-body rashes, and uncontrollable anger.

Graglia talked with Tony’s neurologist, who gave him the green light to try out CBD. First, they tried Charlotte’s Web, a popular CBD oil that is made from hemp rather than marijuana .

As Tony tested new doses, Graglia did too. Concerned about possible effects on their children, many parents try out CBD themselves.

“It doesn’t go into Tony unless it goes into me,” said Graglia.

Graglia settled on a CBD oil called Jayden’s Juice, which was invented by Jason Stanislaus, the owner of Jayden’s Journey. Stanislaus developed “Jayden’s Juice” for his son, who suffered from Dravet syndrome, a severe form of epilepsy.

Graglia pays about $400 for a month’s supply of Jayden’s Juice. Health insurance doesn’t cover the CBD oil, so families have to pay out-of-pocket. Depending on their child’s dosage, parents can spend upwards of $1,000 a month.

When Graglia forgets to give Tony his CBD dose, he sees the difference. Within 30 minutes, Tony flies into a rage, throwing things across the room.  Each time Tony’s behavior degenerates without CBD, Graglia is reminded of its efficacy.

CBD helped for some things, but not all. In conjunction with a special diet, it reduced Tony’s seizures and improved his mood and behavior. It didn’t help with sleep, so instead Tony takes melatonin and an herbal sleep aid each night.  CBD did not treat Tony’s intellectual disability either .

Graglia is just one of many parents that have reached for CBD oil in the hopes of it helping their children’s health.

“All of these parents are in panic mode, whether they admit it or not,” said Graglia.

Yet CBD is not a universal remedy. Hearing promising anecdotes, some parents try treating their children with CBD, with disappointing results.

“It’s trial and error, it’s not one size fits all,” said Stanislaus. “CBD is a piece of the puzzle; it’s not a cure-all.”

When her son, Connor, who has a severe autism spectrum disorder, was having violent outbursts that threatened his ability to stay at his care facility, Ellen Moran was desperate for something that would improve his anxiety and behavior. Concerned about side effects from psychiatric drugs, she obtained a large box of different CBD oils and proceeded to test out doses on herself, her husband and their son.

The results were unconvincing. Now, they are trying out traditional psychiatric medicine.

Dr. Glenn Elliot, a renowned child psychiatrist practicing in Palo Alto, said that CBD can seem like an attractive option, since psychiatric medicines have long lists of side effects, and CBD’s side effects are more unknown . Also, he explained that since doctors offer few options for treating autism, parents are willing to try new and untested treatments.

California’s legalization of marijuana in 2016 has stopped raids like these and has given rise to the Bureau of Cannabis Control’s unprecedented degree of oversight.

Licensed dispensaries must obtain their cannabis products from distributors, who must have each unique batch of product tested in a bureau-approved lab.  There are about 56 licensed labs in California, about 31 of them are operational, and they send all of their testing data to the BCC.

The BCC also randomly audits labs .  This week, a lab was shut down by the BCC for falsifying results.  Also, when batches fail, most commonly due to inaccurate label claims or contamination by pesticides, the BCC issues recalls. This year, it has already issued six.

“Our cannabis is going to be cleaner than our food and our water,” said Max Mikalonis, a lobbyist at K Street Consulting, a firm based in Sacramento.

Still, doctors are concerned about whether CBD oils’ contents match what they say on their labels, possible drug interactions, and standardized dosing.  Besides Epidiolex, CBD oils are not FDA approved and do not go through the standard pharmaceutical regulations.

Following the approval of Epidiolex, FDA commissioner Dr . Scott Gottlieb was careful to emphasize that the approval was of one CBD drug approved for a specific use, not an approval of all of marijuana and all its components. The FDA also actively investigates CBD products sold online for making unproven medical claims.

“When you go a CVS, or a Rite Aid, and you pick up your prescription, have you ever doubted the truthfulness, the fidelity of that pill being sold to you by a pharmacy? No.” said Fong.

Potential CBD consumers should be most concerned about products from online retailers, “pop-up shops,” and delivery businesses, which often lack licenses, and therefore have no oversight about the purity of their products. “Pop-up shops” are dispensaries that open up illegally and operate for a few months before being shut down. Similarly, many delivery operations are suspect, as about 85 percent of Californian cities do not issue delivery licenses, according to Jacqueline McGowan of K Street Consulting.

“If there’s anything parents should be wary of, it’s these outlets,” said McGowan.

Medical marijuana is not on the syllabus

Dr. Tim Fong, the UCLA’s Cannabis Research Institute researcher, attended Brown University’s medical school in the 1990s.  When asked how much he learned about medical marijuana when he went to school, he said, “Absolutely nothing!” with a laugh .

Another part of the problem lies in a lack of research to substantiate evidence-based care.

The Drug Enforcement Administration classifies cannabis as a “Schedule I” drug, alongside heroin and LSD.  These drugs are considered to have “no currently accepted medical use and a high potential for abuse.”

Cannabis’s Schedule I classification makes it costly and difficult to do research on medical marijuana.  The federal government doesn’t provide grant money for cannabis research, and researchers need a “Schedule I” drug license in order to possess cannabis in their labs.  The license generally has a processing time of six to eight months, and afterwards, researchers can only run tests using cannabis supplied by the government.

“If you’re a researcher, the last thing you are going to want to do is go into a very controversial research area where there’s no funding .  How are you going to build a research career off that?” said Fong.

The scant research on medical marijuana has shown that is can be useful for chronic pain, nausea and vomiting caused by chemotherapy, and symptoms of multiple sclerosis (MS).  For those under eighteen, medical research only supports the use of CBD to reduce pediatric seizures.

“That doesn’t mean that it’s ineffective for depression or anxiety or ADHD or insomnia,” said Fong.  “It just means it hasn’t been scientifically proven.”

Still, doctors have the opportunity to guide their patients who are considering cannabis as an option. UCLA’s Cannabis Research Initiative holds a research symposium that physicians can attend to learn more about cannabis. Doctors can also help patients be smarter consumers, by encouraging them to buy from licensed dispensaries.

“Nearly 20 percent of Americans are using [marijuana] on a regular basis.  That many Americans are using this product that has a direct impact on their health, their brain, their body and their mind,” said Fong. “We better be teaching our students.”