Jayden David’s seizures have been reduced, and his life is far more normal, now that he’s medicated with a form of liquid marijuana, his father Jason said .

A six-year-old California boy who suffers severe seizures that leave him shaking on the ground and crying for help has finally found some relief, his family says .

“He’s in pain and suffering and crying,” father Jason David said . “You can’t help him no matter what. What are you supposed to do? You have to do whatever it takes to save their life.”

Jayden’s seizures were an almost daily nightmare, David told CNN . His son’s life was so crippled by the violent shaking caused by Dravet’s syndrome, a rare form of epilepsy, he couldn’t walk or eat solid food and he had been rushed to the hospital in their hometown of Oakland more than 40 times .

Jayden was even taking 22 pills a day, though nothing improved his condition .

So last year, David gave his son a liquid form of marijuana, which is legal for some medical purposes in California . The results were dramatic, David said.

For the first time since he was four-months-old, Jayden can now make it through a day without a seizure, his father said .

In the past year he has been able to walk, run, swim and play with other children .

His father has also begun to take Jayden off the two dozen anti-seizure pills he had been prescribed, believing they might have kept the boy from developing properly, CNN reported . 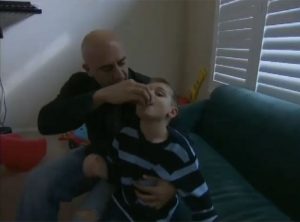 “What I worry about are the thousands and thousands of children like Jayden who are suffering unnecessarily, who I know we could help,” he says. “The only thing separating them from help are outdated rules that need to be changed.”

A child’s brain “continues to undergo important development up until the age of 25…and children and adolescents are at far greater risk of becoming dependent on marijuana, and dependence happens far more quickly,” the California Society of Addiction Medicine argues in a research paper.

But to David, the benefits have far outweighed the risks.

“Instead of medical marijuana, this is miracle marijuana,” he said.