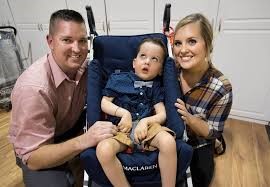 The Reynolds family says such restrictions are making it harder for them to treat their 18-month-old son .

“Abusing any drug is not right, but when you’re not abusing them and you’re using them to help your children, I think that’s a totally different thing,” Katharine Reynolds said .

Katharine’s son Case has a rare disorder called 5Q14.3 Microdeletion Syndrome. In his specific case, he is missing 15 genes in his 5th chromosome . That, combined with epilepsy, caused the toddler to have hundreds of seizures per day.

“Some of them hurt him. So it’s hard to see him go through that . It’s a lot to take in,” Katharine said.

The Reynolds say they tried several different prescriptions that had undesired results. When Case was 8 months old, his parents started him on a regimen of medical marijuana oil also known as CBD .

“If you would have seen him a year ago, he was a completely different kid,” Mike Reynolds said.

“He actually responds to our voice now, and he’s just much more at peace . He’s not as frustrated or irritable as he was,” Katharine said.

Case’s father, Mike Reynolds, says he makes trips to Oakland at least once a month to purchase CBD for his son .

“We’re not into growing, it’s a whole other science. But not everybody can afford what they need for their kid,” Mike said .

Mike told FOX40 some families do grow medical marijuana and turn it into CBD for their disabled children.

“That way it’s cheaper for them,” Mike said .

He said Modesto’s medical marijuana restrictions make it harder for families like his own to treat disabled children.

Modesto’s Planning Commission will present a report at a Modesto City Council meeting Monday night. They are encouraging public comment. City council would still have to adopt the proposal in order for new restrictions to take effect.